Something that will appear in almost every villain crew, the prisoners are a very commonly seen sight in BMG. They're great list fillers and fill gaps better than any other, but also have great roles on their own that isn't really covered by that many other models in the game. 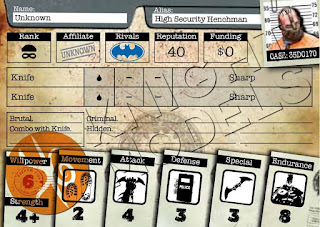 The most expensive prisoner (but also the best overall) High Security Henchman is a versatile and useful model to slot into any villain crew even with his steeper price tag.
Offensive
He has a single package based all around shanking enemies, but he does this well. Only single blood on the knives, but with 4+ strength and Sharp they're reliably wounding, and attack 4 with Combo means he can throw out a few dice to get as many hits as he can. Brutal lets him fish for crit or Knock Down results on the Collateral Dice which is great, and can set things up for later.
Defensive
He doesn't have any traits to help him out, but he is defence 3 and endurance 8 which is pretty good for only 40 rep. Really that's all to say.
Overall
Like the rest of his brethren, he has Criminal for if he KOs or kills an opponent. Especially nice to bump up to willpower 7, it means if he can bully a weak henchman early he will be able to get a big boost for the rest of the game. Hidden is his biggest boon, as it allows him to easily get into the fray and start challenging the opponent early, both through attacking models and claiming objectives. 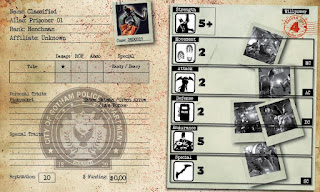 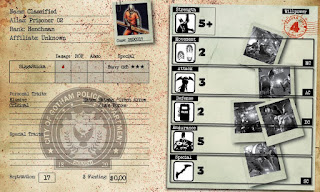 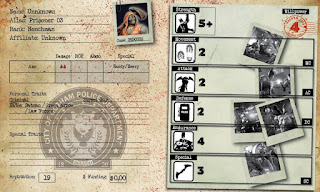 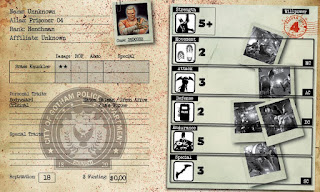 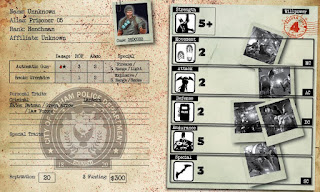 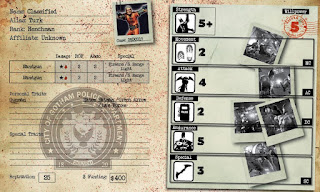 The old metal prisoners are all very similar, having similar statlines and only really different weapons and some traits.
Offensive
Prisoner 1 has a simple little Tube. Handy/Heavy with single stun damage, it wounds on 4s and at attack 2 he isn't hugely likely to get attacks through. He's 10 rep though, and for that you can't complain that he isn't amazing in combat
Prisoner 2 is an odd model, with his weapon being not that great. The BiggaSticka (seriously, what is that name) does a single blood at strength 5+ with Heavy, meaning it will wound 50% of the time, and it has crit:triple stun which is nice when it triggers but not something to bank on. For such a large weapon though, you would think it would have Reach (it's almost 3 times the size of an Extendable Baton and double Deathstroke's Bo) but it doesn't, and all in all he is just a mediocre model for the big points hike over Prisoner 1.
Prisoner 3 has an axe, which is a quite good weapon, but at only attack 2 he will rarely, if ever, actually deal damage with it. He is ridiculously easy to block and his output isn't really that good given he is almost 20 rep, and there are far better choices for this cost.
Prisoner 4 has Brass Knuckles, which are in effect Reinforced Gloves that can be stolen. It's not his big use in any given list, but it's decent enough that it can be used well.
Prisoner 5 is arguably the best in this regard, with a lot of good tricks that can help in many ways and slot into most crews well. For only $300 in funding he gets 2 ammo on an Automatic Pistol which is fair for the cost and a decent weapon for damage, and 2 Smoke Grenades (amazing as always). He is only attack 2, but with 4 ammo that doesn't matter because he won't be punching things anyway, it's his job to shoot.
Turk is a pure shooting model, and he does it pretty well. Carrying 2 Handguns (Automatic Pistols with 1 less shot) with 2 ammo each, he can put out some good shooting just from that. He does however have Gunman, which means for 2AC and 2SC he can shoot both guns in the same turn, and even though this is 4/5 counters he has and chews through his ammo it can be a great way to take out a threatening model that is closing in on the crew, which is very useful.
Defensive
Every single one of these models is defence 2, with endurance of 4 and 5. They're very easy to kill, but they're also ridiculously cheap so it doesn't really matter.
Prisoner 2 has Elusive, which lets him reroll Ping rolls at the cost of a movement. As a trait it isn't really great, and especially on a model with only willpower 4 it won't often see use as he wants to actually impact the game. Prisoner 3 has Street Guy to get free Crouch, but it only bumps him up to defence 3 anyway and with endurance 4 it won't make much difference in how quickly he dies. Prisoner 4 has 2 Smoke Grenades which are great for keeping the crew safe, and will be a godsend in any crew that can take them because of just how good they are.
Overall
All are Criminal with all that comes with it, and the standard Hates: with all the good guys. Prisoner 4 has the very good Bodyguard trait, and for his 18 rep cost is a great way to tack some extra endurance onto any villain leader for a low investment. Prisoner 1 has Pickpocket, which lets him take other model's weapons when they are KO and use them for himself which is funny but not all that common to see. Prisoner 5 has Lantern, which given his short ranged nature might seem useful, but he is also good at breaking lines of sight to the enemy, not creating them. Lantern with his stats is almost guaranteed to get him killed and isn't useful for this reason.
The main uses for these guys are their cheap cost to fill points in lists, although now that they are Eternal it is less commonly seen that this will happen and even the mainstays (Prisoners 1, 4 and 5) are now fading away. 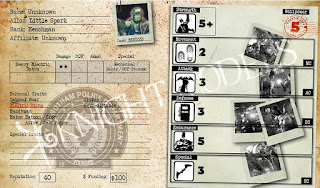 The last of the metal prisoners, Little Spark is a bit different in how he functions.
Offensive
He has attack 3, strength 5+ which isn't great but his Heavy Electric Baton more than makes up for it. A similar weapon to Nightwing, it does double stun with Mechanical and Handy, with also having Crit:Stun as a nice little extra. It lets him do a good amount of reliable stun damage, and he can hurt a good amount of models with it.
Electric Storm as a special attack is pretty much garbage. It costs 3SC (that he could be using on Unpredictable) for a single explosion template that only does the same damage as his Baton, and he won't really be doing that much valuable damage with it that will have a huge effect on the game.
Defensive
Little Spark has defence 3, something none of the other metal prisoners have, and endurance 5. This alone is ok but not great for 40 rep, but he does have Catcher Gear to help him against Heavy weapons (quite a lot) and Sturdy which will stop him losing more than one counter from damage. Overall not huge, but not terrible.
Overall
He has Handyman, letting him manipulate for free and can potentially heal Vehicles (neat with Bane or Penguin). His biggest draw though is Unpredictable, which turns his average willpower of 5 into an insanely versatile set as he can spend special counters as anything else. This lets him have 5 attacks or blocks which can both be great, or even 5 movement counters for a super fast turn to grab objectives. In terms of sheer versatility this is very much worth it. 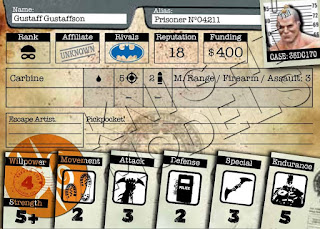 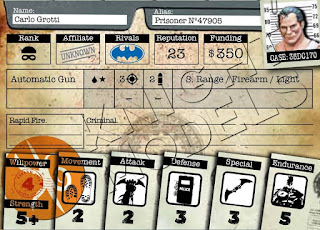 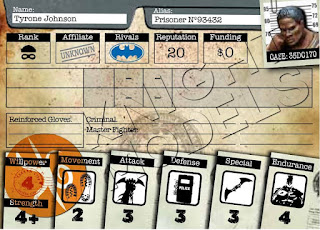 The 3 newer prisoners from the resin set, all 3 are useful and can see play, but ultimately some will see more than others as they are overall more useful.
Offensive
Gustaf has a cheap Carbine, albeit at $400 instead of the usual $350. That is enough to mention because it is still very good value with his gun, and he's a great take to fill lists.
Carlo has an Automatic Pistol with 2 ammo, and Rapid Fire. Possible 4 shots a turn is excellent, and he has some game with it but isn't as awesome as Gustaf is. However, he tops out at 8 damage which is very impressive for his cost.
Tyrone is the melee model of the 3, and packs Reinforced Gloves and Master Fighter at strength 4+. This is definitely good, but outside of some lists that buff him up a ton (namely Ventriloquist) he isn't as great of a choice over most in-faction melee options even with his cheap cost.
Defensive

Not quite as glass as the other prisoners, as 2 of the 3 are defence 3 natively and 2 are endurance 5. Tyrone is endurance 4 which isn't great, but defence 3 is a good counter and at his cost doesn't really matter. Gustaf at defence 2 endurance 5 is justifiable for 18 rep, and he has Escape Artist to make him immune to Grab (if he ever will be grabbed, it isn't huge on him) while Carlo just has defence 3 and endurance 5, respectable enough stats.
Overall
Criminal again as is standard for prisoners, but all 3 still have willpower 4 natively so not too many counters to play with. Gustaf also has Pickpocket like Prisoner 1, although with a Carbine he won't always find weapons that are worth taking from an enemy, usually melee weapons or really good guns like Lerida's SMG.
Posted by Rygnan at 11:05 am

Some important links for BMG- I would recommend visiting these